Faded socialite Marcus Lwanga alias God’s Plan has taken to his Snapchat to brand his former friend Rickman Manrick a snake for reportedly snatching his lover Sheilah Gashumba away.

According to God’s Plan, Rickman used to chill from his apartment, eat his food little did he know he would end up eating his girlfriend too.

“Nigga used to come to my apartment to chill, drink and eat food.” God’s Plan wrote. The depressed socialite also added multiple snake emojis on Rickman’s picture that has since gone viral. 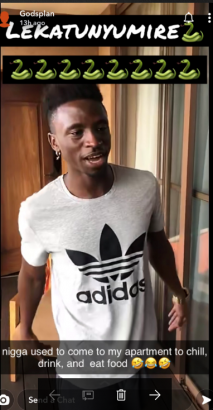 The post attracted comments from the Twitter community as some Ugandans weighed in on who is better between God’s Plan and Rickman.

Some Tweeps have branded Rickman the President of Stingy Men Association of Uganda (SMAU) after failing to spoil Sheilah with flowers on Valentine’s Day. Others don’t believe Sheilah is worth God’s Plan’s sadness as they advised him to move on.

“So Gods plan is sad all along for losing Sheilla.  How can you feel bad for losing a***” One Twitter user wrote.

During their heydays, God’s Plan would spoil Sheilah with flowers almost every day in addition to the expensive lifestyle he was giving her. Netizens are now wondering why Rickman failed to spoil Sheilah on her birthday and on the just concluded Valentine’s Day.

Below are more reactions; 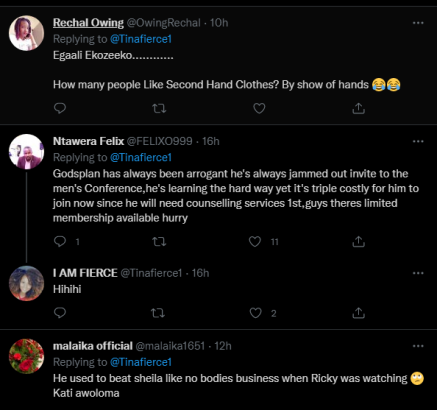