Chepetgei was in the leading pack for most of the race and won in 12 minutes, 58.15 seconds. 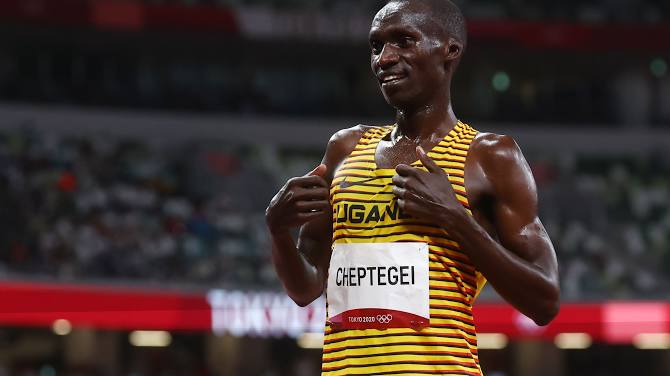 Mohammed Ahmed of Canada surged into second place to get the silver medal in 12:58.61 and Paul Chelimo of the United States picked up bronze in 12:59.05.

Chelimo was a silver medalist in the 5,000 at the 2016 Rio de Janeiro Olympics. He dived across the line to edge Nicholas Kipkorir Kimeli of Kenya.

Cheptegei came into the race as one of the favorites to take the gold after setting the world record for the 5,000m in Monaco last year.

He came out of the blocks quickly but the race pace was sporadic for the opening rounds, with the slower laps keeping Team GB’s Butchart in contention.

But a leading group of 10 runners, with Cheptegei at the front, broke away with three laps to go leaving the Briton behind as the leader of the second group.

Cheptegei then sped away as the bell rang and was relatively untroubled when he crossed the line with a time of 12:58.15, around 23 seconds behind his own world record time.

This is Uganda’s second gold in the ongoing Tokyo Olympics after Steeplechase runner, Peruth Chemutai won gold in the 3000m race in Tuesday this week.